Think you’ve seen the last of the broad market rally in 2018? Think again.

So far, all signs point to February’s selloff being a normal correction, rather than the start of a new major trend. And that comes with some important implications for investors — namely the fact that the high-flying FAANG stocks could be getting ready for another leg higher.

This handful of tech giants has been a set of serial outperformers in recent months, rallying around 46% each on average over the course of the last 12 months. That’s compared to a 14% up-move in the rest of the S&P 500 over the same timeframe.

But not all the FAANG stocks look equally positioned coming out of this market correction. In fact, one stands out as the best tech stock to own as the dust settles.

To break down the trading setup in play in Alphabet right now, we’re turning to the chart for a technical look at what’s happening in Alphabet and when you should buy it. 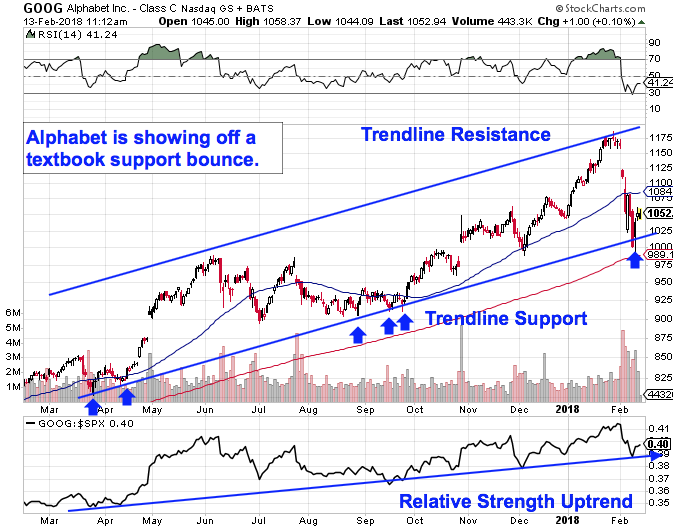 Both classes of Alphabet’s stock are showing off effectively the same price setup right now. And the good news is that you don’t need to be an expert technical trader to figure out that price action. In fact, Alphabet’s chart setup is about as simple as they get right now.

This big tech stock has been bouncing its way up and to the right since the beginning of last year, rallying in a very well-defined uptrending channel all along the way. That uptrending channel provides the high-probability range for shares of Alphabet to remain within. So, after touching trendline resistance in the final week of January, it’s not out of character for this stock to test trendline support for a sixth time as the broad market correction plays out.

Critically, though, Alphabet caught a bid at support, holding onto its uptrend and setting the stage for another leg higher.

From here, it makes sense to buy this week’s bounce off of support. We’ve just gotten a clear signal that buyers remain in control of shares.

If you decide to be an Alphabet buyer here, the 200-day moving average is a logical place to park a protective stop; if it gets violated, the uptrend is over. Until then, it’s a “buy the dips stock.”