Fitbit delivered a messy quarter in which 4Q17 revenues, EPS and 2018 outlook all fell below expectations.

I like to bet on turnaround stories, but Fitbit’s is so incipient and uncertain that doing so now seems almost irresponsible.

It was hard to find the silver lining.

This Monday after the closing bell, Fitbit (FIT) delivered an all-around miss and 2018 outlook that fell well below expectations. Revenues of $571 million landed $18 million short of consensus, while adjusted net loss per share of -$0.02 fell two cents below the Street’s estimate. 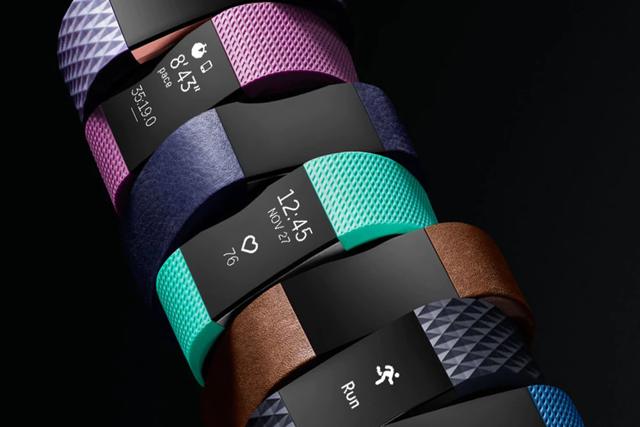 Units sold did not fall as sharply as they had last quarter: -17% this time vs. -32% in 3Q17. But for a company looking to gain traction in the early stages of its turnaround efforts, it is hard to celebrate these results. Average selling price improved as I expected, following the introduction of the pricier Ionic smartwatch. But it was not enough to push sales any higher than the lower end of management’s wide guidance range.

On profitability, gross margin continued to decline sequentially, now to 44.2% on a non-GAAP basis vs. 45.2% last quarter. Considering the higher ASP and holiday quarter volumes, I was anticipating this number to be a bit richer. But unlike 3Q17, when the bankruptcy of top client WYNIT caused significant headwinds, this time Fitbit managed to keep opex under control at 43% of total revenues vs. last year’s much more concerning 50%. A very rich tax rate probably contributed greatly to the earning miss, which might please the more optimistic investor as a large chunk of the bottom-line drag seems to have been unrelated to the company’s core operations.

See summarized P&L below, in GAAP and non-GAAP terms. 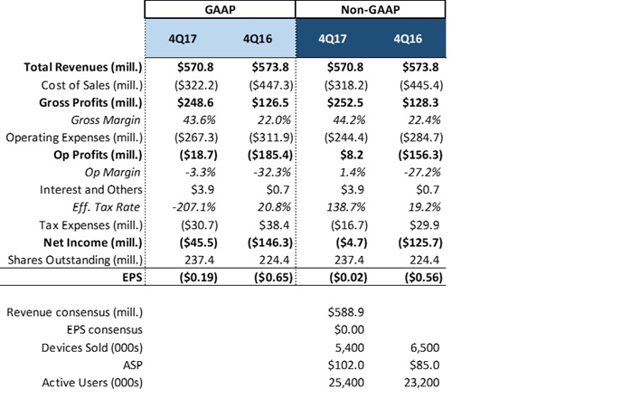 Perhaps more concerning than the results of the quarter was the company’s outlook for 2018. Limited revenue from new product introduction and immaterial growth from Fitbit Health Solutions and premium subscribers will set the tone for a tough few quarters ahead. Full-year revenue guidance of $1.5 billion is significantly lower than now-stale expectations for $1.74 billion. For the upcoming quarter, management’s bar for non-GAAP EPS was set at a discouraging -$0.20 vs. -$0.09 consensus.

But let’s take one step back

Looking at the results of the quarter and the 2018 outlook, there’s virtually nothing that I could hang on to and justify an investment in the stock at current levels. I like to bet on turnaround stories, but Fitbit’s is so incipient and uncertain that doing so now seems almost irresponsible, in my view.

However, I have one reason to believe that FIT stock might find its bottom soon, and it has little to do with the business prospects. A look at the balance sheet reveals that the debt-free company holds a large sum of cash totaling $679 million that corresponds to nearly 60% of market cap, after factoring in the 10% after-hours share price dip. The cash pile seems to be well protected by free cash flow that, while not impressive, remained in positive territory this quarter and has been guided to stay flat in 2018.

Not long ago, I argued that “even when or if revenues return to growth, reach the $2 billion mark per year (maybe in 2019, very optimistically), and op margins bounce back to the 18% levels of 2015 (GAAP), the stock might at best be fairly valued in the $6-$7 range.” With shares possibly trading in sub-$5 territory tomorrow, it is possible that this longer-term target range could entice potential investors to take a swing at about 30% upside potential by 2020, while the company’s cash position might serve as a stock price floor between now and then.

Yes, buying FIT using the above rationale is highly speculative. I would feel uncomfortable pulling the trigger. But those who are attracted to the gambling aspect of the stock market might find FIT an interesting opportunity to bet a few chips on.